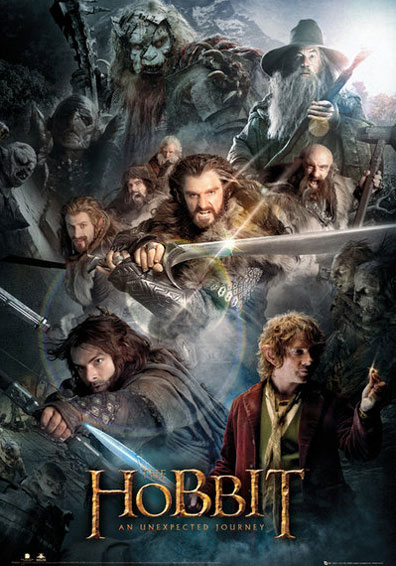 I enjoyed The Hobbit when I read it for the first time last November. I’m not a fantasy fan normally, but I liked the characters and wit in The Hobbit.

I saw The Hobbit’s 3D IMAX version and it was the first time for me to see a 3D film, which I found kind of cool, but not necessary. In fact as the story progressed, the 3D aspect was rather distracting.

As I watched The Hobbit, I wondered about the frame with some old guy I didn’t know since I haven’t seen The Lord of the Rings going about writing and explaining why he was writing the story of Bilbo Baggins. I’d have cut that as I don’t think Peter Jackson needed this extra link to his first trilogy.

I thought Martin Freeman and Richard Armitage, old “friends” from Sherlock and MI-5 respectively, were good. All the actors were. What I had problems with was the extras stuffed into the film. I didn’t need the high octane fighting scenes and the drawn out CGI effects. Just because you can do something, doesn’t mean you should.

Jackson’s imprint is bold in this film as the tone differs from Tolkien‘s novel. I thought the best parts of the film were Tolkien’s wit and gentle narration. The scene where the mountains and rocks came to life to do battle was just bizarre. I left the theater rather worn down by the clamor and epic, slick action. Again, I often felt I was watching a computer game.

I’m glad I saw The Hobbit, but don’t feel I need to see two more films in this trilogy, that could easily be one film. I think Peter Jackson just wants to milk the story and beef up ticket sales. I agree with Salon writer Ilana Teitelbaum who thinks “Hollywood” has stripped The Hobbit of its poetry.

Posted by smkelly8 on January 5, 2013 in British Lit, Children's Lit