I didn’t think I’d like Shakespeare’s The Winter’s Tale. I chose it for my online Great Books Book Club because I thought we should read Shakespeare; it’s winter and I’d never read this. Before beginning the play, I looked at some summaries on YouTube. Both summaries showed the main character, King Leontes.

When I started the play, I was put off by King Leontes’ unhinged ravings. He wrongly assumes that his wife Queen Hermione and his best friend since childhood, Polixenes, the King of Bohemia, have had an affair and that Hermione is pregnant with Polixenes’ child. It’s clear that the saintly Hermione and Polixenes have done nothing wrong. Yet Leontes raves and raves. His courtiers try to persuade him to cool down, to see that he’s wrong, but he ignores all reason. Camillo, the King’s confidante, tips off Polixenes telling him that the King is out for his head. They both escape to Bohemia.

Soon Hermione gives birth to a daughter. Paulina, my favorite character, takes the baby to Leontes, hoping that will make him change heart. The plan fails. Leontes decides that Paulina’s husband must take the baby to a desolate land and abandon her.

Obstinate and indignant, Leontes holds a trial for Hermione. Couriers sent to an oracle return and present the trusted the oracle’s pronouncement, which exonerates Hermione. Still Leontes digs in, ignores the “testimony” and sentences Hermione to prison. As a result of his mother’s imprisonment, Leontes beloved son falls ill and dies.

The first three acts of The Winter’s Tale are full of bullheadedness and tragedy. The second acts offers hope and romance.

Leontes is a vexing character surrounded by reasonable and admirable ones. It was hard to believe he never considered that he might have been wrong and it that he remained in power for a generation. The play’s tone changes so much in the last two acts that The Winter’s Tale feels like two plays.

I wound up enjoying the play and understanding or putting up with Leontes since his senseless wrath put all the events in action and showed the goodness of those around him in stark contrast.

I started by reading the first two acts and then watching the 1981 BBC Production. Later I changed to watching while reading. Although this production is old, I enjoyed the performances and got used to the older style sets and lighting.

The end has some far-fetched elements, the word “Tale” in the title serves to let the audience know that it’s not a realistic work.

Comments Off on Review: The Winter’s Tale

Posted by smkelly8 on February 3, 2021 in British literature, drama

Here’s flowers for you;
Hot lavender, mints, savoury, marjoram;
The marigold, that goes to bed wi’ the sun
And with him rises weeping: these are flowers
Of middle summer, and I think they are given
To men of middle age

In honor of Shakespeare, some actor’s sharing of taste of his genius.

Comments Off on Happy Birthday, Will!

The quality of mercy is not strained;
It droppeth as the gentle rain from heaven
Upon the place beneath: it is twice blest,—
It blesseth him that gives and him that takes:
‘Tis mightiest in the mightiest; it becomes
The thronèd monarch better than his crown:
His sceptre shows the force of temporal power,
The attribute to awe and majesty,
Wherein doth sit the dread and fear of kings;
But mercy is above this sceptred sway,—
It is enthronèd in the hearts of kings,
It is an attribute to God himself;
And earthly power doth then show likest God’s,
When mercy seasons justice.

The Book of Will 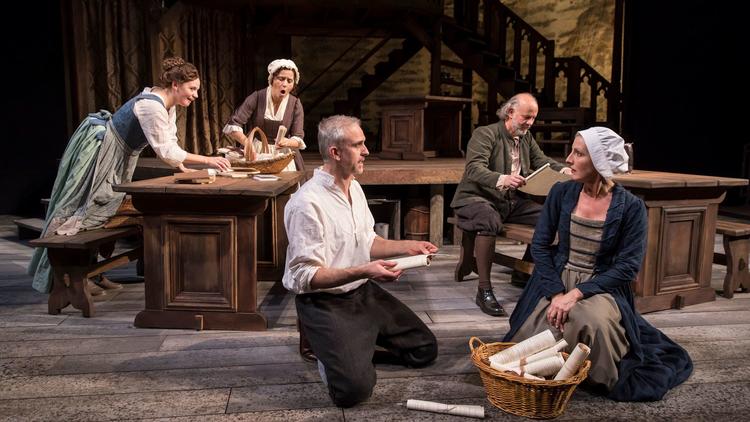 What a fun play! Written by Lauren Gunderson, The Book of Will at the Northlight Theater till December 17th tells the story of how without the effort of his friends, we wouldn’t have an authentic collection of William Shakespeare’s plays. In 1620 after Will had passed on, his friends were fed up with bad Shakespearean plays. Some were bad versions patched up with garbled versions of the plays made from copyists in the audience who tried to take down everything that was said. Some were just plays written by hacks who tried to copy Shakespeare’s style.

The play begins in a pub near The Globe theater where three of Shakespeare’s friends Richard Burbage, John Heminges, Henry Condell, actors from the King’s Men’s troupe and Condell’s daughter Elizabeth bemoan the horrible fakery that passes for Shakespeare. When Burbage dies suddenly they realize the only chance for passing these masterpiece plays down to posterity is to collect and publish a folio. It’s an expensive undertaking that is complicated by the lack of a full set of originals. A few plays are here, another bunch are with a scrivener, most actors only got their part, not the full play so some had to be carefully put together. No respectable printer wanted to touch the project so Heminges and Condell had to settle for a slimy, greedy cheat.

The play is delightful as it weaves memorable passaged of the Bard’s work throughout the story, which is well paced. The characters include Shakespeare’s wife, daughter and mistress, and Heminges’ and Condell’s wives and and so there is some female influence supporting the impossible project. The Northlight’s set and costumes were perfect. I’m tempted to go again.

What’s great about the Northlight is free parking and every seat has a clear view.

Now I want to visit the Newberry Library and see the First Folio in person.

Comments Off on The Book of Will

I’m reading the absorbing Shakespeare Saved My Life: Ten Years in Solitary with the Bard by English professor and Shakespeare expert, Laura Bates. Bates grew up in a poor neighborhood with plenty of crime and troubles. After getting her doctorate, she begins teaching in an Indiana prison a few days a week. Her employer, University of Indiana offered courses to prisoners. After awhile she convinces the prison to allow her to teach in prisoners in solitary confinement. Her school’s not on board so she does this for free.

Bates describes the details of the high security section of the prison, all the thick double doors she has to go through and all the perils she must avoid. The heart of the book is her engagement with the convicted murders she works with. Their insights and engagement with the plays are a far cry from what you’d expect from men imprisoned for life. Bates’s book also relates the men’s narratives – how they got where they are. It’s an absorbing read. I’d love to see Steppenwolf or the Chicago Shakespeare Theater dramatize it.

Comments Off on Shakespeare Saved my Life

Posted by smkelly8 on July 26, 2013 in American Lit, contemporary, non-fiction