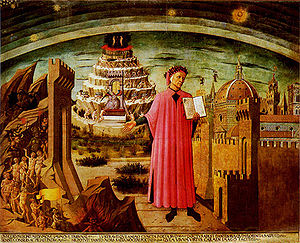 February’s book for my online book club was Dante‘s Inferno. I much preferred this Medieval epic to The Odyssey. It just flowed better. Perhaps it’s the translation. I read the Norton Critical Edition translated by Michael Palma.

In a way, the Inferno is sort of a guide book in which Virgil leads Dante’s personal down, down into the depths of hell. Thus there isn’t a plot as we find in most stories. As the reader follows the pair through each level of hell, you get an understanding of the theology of the day.I also enjoyed learning about all the historical figures, the battles and scandals that led the people to their particular end.

It’s a very visual book and I can see why it makes a good computer game.

It was hard at times not to feel sorry for the damned. I suppose that’s a modern flaw. We tend to rationalize and prefer a softer God. Yet Dante read the New Testament too and probably more often and with a keener mind than I have. I did remind myself that the theology of the time clearly believed in grace and everyone in hell chose it, they could have avoided their punishment.

I was surprised how short the epic was and recommend reading the essays in the back of the critical edition. Also the BBC’s In Our Times has a good program on The Inferno.