The Starlet and the Spy

It’s 1954 and outcast Alice Kim works as a translator for the US Army. She struggles to keep on keeping on after the horrors of war and the emotional wounds from her earlier romantic affairs. Alice gets chosen to translate for Marilyn Monroe who’s coming to Korea to entertain the troops, who remain.

Nervous, emotional and guilt-ridden, Alice feels alienated. A young woman, whose past haunts her must deal with seeing her past lovers and tries to track down an orphan she promised to care for.

While the story’s full of angst, I felt it lacked authenticity, which is surprising since the author researched war diaries and other primary sources. I felt there was too little Marilyn Monroe in the book and thought those chapters were based on stereotypes. I think Monroe was in the story to make it marketable.

The love triangle and the emotional crash that ensued when the married lover caught her in bed with her other lover didn’t endear Alice to me. She lacked the insight to figure out her own responsibility even though all the dots where there. I didn’t find the spy work compelling either.

I prefer Lisa See’s, Jung Chang’s and Winston Graham’s historical fiction. Ji-Min Lee’s The Starlet and the Spy is not a novel you must read.

Comments Off on The Starlet and the Spy

Snow Flower and the Secret Fan 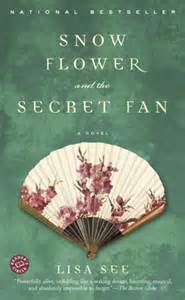 “A lovely face is a gift from heaven, but tiny feet can improve social standing.”

Lisa See‘s Snow Flower and the Secret Fan tells the story of Lily and her “old same” or lao tang, Snow Flower. Because the two girls share so many similarities in birth and life experience a matchmaker pairs them as old sames. During the 19th century in parts of China old sames were vowed relationship between two girls, sort of like an official sworn sister.

Lily and Snow Flower both start the foot binding process, a special form of Chinese torture in which girls’ feet would be bound to attract men and show beauty. The book describes this long process and tells us that at the time a mother’s job was to induce pain in her daughters to prepare them for a hard life. The girls were fed special foods believed to support this process. Furthermore, the girls were forced to walk back and forth in their rooms in agony. Some girls’ did die of infected feet as a character here does.

All this was for status and the women did buy into it. Their actual feet became hideous so women wore silk sleeping shoes in bed for their husbands to fondle.

Fascinating and tragic as this practice is, the heart of Snow Flower and Secret Fan is the relationship between the two girls as they grow. In the beginning Lily is in awe of Snow Flower, her social superior. Snow Flower’s ancestry has greater status and she is far more educated and refined than Lily. Yet as they grow and marry, Lily gains status and security, while Snow Flower is victimized by her father’s decline and her husband’s low status. The book intrigued me as a portrait of a far off, exotic arena where women were taken for granted, yet had the the audacity to invent their own written language, nu shu, which they used to communicate with the people they left behind when they got married off.

Snow Flower and Secret Fan is a dramatic, satisfying book that focuses on the trust, conventions and loyalty in another era presenting a different culture with historical authenticity.

Posted by smkelly8 on April 7, 2013 in historical fiction