Travel writer par excellence Dervla Murphy’s The Ukimwi Road: From Kenya to Zimbabwe chronicles her incredibly journey across Africa on her bicycle in 1992. During this time, AIDS was sweeping through Africa and as Murphy traveled, she learned how AIDS impacted the people of each country. Murphy talks with healthcare professionals, missionaries, corrupt border officials, health educators, prostitutes, feminists,  truck drivers, and more.

Her plan, Murphy insists, was to have a pleasant 3,000 mile ride through Africa. Instead her ride is an intense education into the AIDS epidemic in which she seeks answers to what caused Africa’s epidemic and how can it be stopped in a place where so many men won’t use condoms or stick with one partner. One of Murphy’s strengths is that she judges herself as much as anyone else. She seeks to understand the people of Africa and critiques the role of foreigners who’ve colonized and now offer aid in forms that usually fail.

Murphy’s witty and perspicacious. She’s a keen observer and thorough researcher, who made me feel like I was right there with her listening to stories around a common dinner table as she also made me grateful that bedbugs or dirt roads on a rainy day were affecting me.

Comments Off on The Ukimwi Road 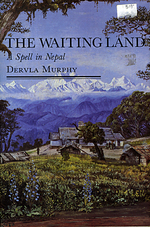 My friend Adrienne mentioned Dervla Murphy as a great travel writer and I was looking for a good book on Nepal so I ordered her “The Waiting Land: A Spell in Nepal.”

I love her writing. She calls everything as she sees it, which makes for good travel writing if you ask me. In this book, Murphy travels to Nepal where she works in a Tibetan refugee camp. Her writing is funny, insightful and gutsy. As a traveler, she takes risks I wouldn’t, such as getting in the midst of a Nepali – Tibetan fracas and almost landing in jail. On her trek she fords icy rivers with water up to her neck — on more than one occasion. She sleeps on mud floors because well, Nepalis do and the mattresses probably have bed bugs anyway.

When I read this book, I felt I knew what it would be like to live and work in Nepal. I felt the people she met were like people any of us might really meet.

Here are a few passages to give you an idea of her writing:

My six months among the Tibetans in 1963 had shown me that many refugees do not deserve the haloes with which they have been presented by sentimental fundraisers in Europe or America. But by the time one had been disillusioned by Tibetans one has also been captivated by them; through unpleasant individuals and events may demolish the idealized version there remains an indestructible respect for the courage, humor and good manners that mark most Tibetan communities.

Before leaving India, early in 1964, I had determined to come back to the Tibetans as soon as possible. However, refugee situations can change quickly and by the spring of 1965 conditions in India had improved so much that nothing really useful remained to be done by an untrained volunteer, and I felt that i would be wrong to inflict on the Tibetans yet another aimless “Tibet-worshipper.” But then came an item of news from Nepal concerning recently-formed refugee camp in Pokhara Valley, where 500 Tibetans were living as family units in 120 tents with only one Western volunteer to help them. It was considered that here I would at least not be in the way, even if my limitations prevented me from achieving much, so on 5 April 1965 I flew from Dublin . . . to Nepal.

And so her journey began. The book is written in diary form and contains entry after entry of observations, insight all delivered with wit. Nepal is indeed different from the West. Here’s another random passage:

Many event which would be regarded as crises a home are witnessed with indifference here.  A few days ago I saw a man attacking his wife outside their house; as his rage increased he tried to pick up a heavy stone for quicker results, but his son, aged about twelve, struggled desperately to restrain him, and eventually the mother and the son were victorious. That afternoon I again went up the street and saw husband and wife sitting in their doorway amicably stripping corn cobs together.

Comments Off on The Waiting Land

Posted by smkelly8 on August 25, 2011 in classic, Travel Writing