Travel writer par excellence Dervla Murphy’s The Ukimwi Road: From Kenya to Zimbabwe chronicles her incredibly journey across Africa on her bicycle in 1992. During this time, AIDS was sweeping through Africa and as Murphy traveled, she learned how AIDS impacted the people of each country. Murphy talks with healthcare professionals, missionaries, corrupt border officials, health educators, prostitutes, feminists,  truck drivers, and more.

Her plan, Murphy insists, was to have a pleasant 3,000 mile ride through Africa. Instead her ride is an intense education into the AIDS epidemic in which she seeks answers to what caused Africa’s epidemic and how can it be stopped in a place where so many men won’t use condoms or stick with one partner. One of Murphy’s strengths is that she judges herself as much as anyone else. She seeks to understand the people of Africa and critiques the role of foreigners who’ve colonized and now offer aid in forms that usually fail.

Murphy’s witty and perspicacious. She’s a keen observer and thorough researcher, who made me feel like I was right there with her listening to stories around a common dinner table as she also made me grateful that bedbugs or dirt roads on a rainy day were affecting me.

Comments Off on The Ukimwi Road

Here’s flowers for you;
Hot lavender, mints, savoury, marjoram;
The marigold, that goes to bed wi’ the sun
And with him rises weeping: these are flowers
Of middle summer, and I think they are given
To men of middle age

Shamani Flint’s first book in her Inspector Singh Investigates series examines a “Most Peculiar Malaysian Murder.”  The troublesome, overweight, snoring and shrewd Inspector Singh is sent from Singapore to look into the murder of tycoon, Alan Lee. His wife, a Singapore citizen and former model Chelsea Lee is behind bars for this homicide. Singh meets with her and his instinct tells him she didn’t do it.

Of course, the local police don’t take a cotton to an outsider snooping around, When Chelsea’s brother-in-law confesses to the murder, Chelsea and Singh are free to go, you might say, but Singh doesn’t buy this convenient confession and takes some vacation time to investigate.

Along with the murder, readers are treated to a vicarious trip to Kuala Lumpur. I have visited Malaysia a few times and I think Flint added the right spice to the murder mystery sauce here. I read it for a new book club that I’m co-facilitating and the club members enjoyed the story and it’s interplay of Malay, Chinese and to a lesser extent Indian culture. It was a pleasant, quick read that provided plenty to discuss.

Comments Off on Inspector Singh Investigates

Although the cover of my advanced copy claimed this as the “New Great American Novel” I found the structure of the novel confusing, the characters stereotypes and the plot contrived. I would have abandoned it except I was reading it for a new book club that I’m facilitating.

The story was about a rich WASP family (the term WASP is used in the book itself) that suffers some tragedy early on and then refuse to take in a Jewish boy from Germany during WWII. The patriarch of the three generations shown is in finance and his company invests in a company in Nazi Germany throughout the war.

The family owns an island and big summer home there. The idyllic summer home is an idol. The book shines light on the guilt and bigotry of the family. The chapters jump from era to era and managed to both bore and confuse me.

All the characters seemed similar. One granddaughter had epilepsy and that was the mark for her character. Most characters blended into each other.

I wish I didn’t have to read this whole book, but feel as a book club facilitator I should. The guest book in question isn’t mentioned till the last 85% of the book.

I hope the next book is better.

Comments Off on The Guest Book

Leave it to Psmith

I just finished another hilarious audio book narrated by Jonathon Cecil. Wodehouse’s Leave it to Psmith is a complicated frolic involving Freddie, a rich foolish young man, who tries to get his uncle out of a fix and to get a hefty sum so he can get enough money to buy into a booking scheme. If he only could become a bookie, he can marry his dream girl. All he needs is 1000 pounds. His uncle would help but his parsimonious aunt keeps a careful eye on all the family finances.

Freddie will get someone to steal his aunt’s insured necklace, hand it off to the uncle who’ll in turn submit a claim for the necklace, sell off the real one and give some money to Freddie, some to his needy niece and have some freedom for himself.

Who will take on this ridiculous endeavor?

Enter Psmith. A gentleman who’s fled a dull job for his uncle and has advertised to take on any work. Soon Psmith is posing as an erudite poet and entering the uncle’s country home to figure out how to get the necklace.

The story is great fun and wonderfully read by Cecil.

Comments Off on Leave it to Psmith

The Age of Innocence 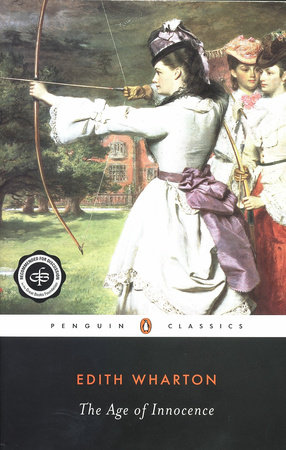 My friend Bill and I choose a novel to read and discuss online. This time it’s Edith Wharton’s Age of Innocence, which I find vexing. Published in 1921, Age of Innocence is a look back at New York society of the late 19th century’s wealthy class. It starts with the main character, Newland Archer a callow, complaining young man, who fancies himself superior to all around him. He takes no serious interest in his work or any endeavor. When Newland is about to announce his engagement to the pretty and docile May Welland, her exotic cousin Countess Ellen Olenska appears fleeing Europe and her aristocratic, boorish, brute of a husband. Soon Newland is captivated.

Most of the story is about Newland’s infatuation with the passionate Ellen, whom he’s willing to desert his young wife May for. Ellen goes back and forth between tempting and repelling Newland.

Much of the book consists of Newland’s thoughts on how awful New York society is. This slice of the upper crust is insulated and vapid and it’s easy for Newland, who doesn’t realize he’s no better, looks down on all around him. He’s cultivated no friendships. Unlike many of his era, he doesn’t strike out on his own creating new ventures or exploring new interests. For the most part he spends his time mentally criticizing May and plotting to find time to spend with Ellen, who under her surface of panache doesn’t seem to offer much substance that’s original or creative. She’s a flibbertigibbet in a Worth gown.

While Wharton has a knack for wit and description, she aims at a view of a past society that excludes its finer points, such as charity and inventiveness. I wish she had taken a shot at her own era more directly and that she had included at least a couple characters I could admire. Because it featured so much sniping at tedious, stereotypical characters I found the book a chore to get through.

Comments Off on The Age of Innocence