RSS
← American Writers Museum
The Book of Will → 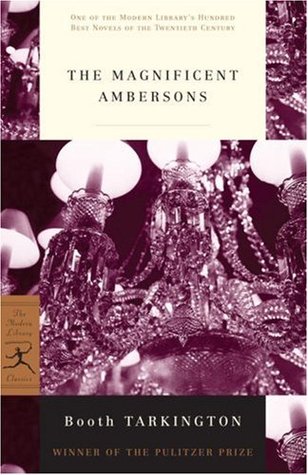 Booth Tarkington’s The Magnificent Ambersons witty observations on the Gilded Age. The first passages grabbed me.

Major Amberson had “made a fortune” in 1873, when other people were losing fortunes, and the magnificence of the Ambersons began then. Magnificence, like the size of a fortune, is always comparative, as even Magnificent Lorenzo may now perceive, if he has happened to haunt New York in 1916; and the Ambersons were magnificent in their day and place. Their splendour lasted throughout all the years that saw their Midland town spread and darken into a city, but reached its topmost during the period when every prosperous family with children kept a Newfoundland dog.

In that town, in those days, all the women who wore silk or velvet knew all the other women who wore silk or velvet, and when there was a new purchase of sealskin, sick people were got to windows to see it go by. Trotters were out, in the winter afternoons, racing light sleighs on National Avenue and Tennessee Street; everybody recognized both the trotters and the drivers; and again knew them as well on summer evenings, when slim buggies whizzed by in renewals of the snow-time rivalry. For that matter, everybody knew everybody else’s family horse-and-carriage, could identify such a silhouette half a mile down the street, and thereby was sure who was going to market, or to a reception, or coming home from office or store to noon dinner or evening supper.

The story’s hero is George Amberson Minafer, the most egotistical fool I’ve ever read about. When George is a boy in the small Middle American town his grandfather developed from what seems to have been prairie, he fights with every boy who looks at him the wrong way. He’ll pound the pastor’s son to a pulp and curse at the pastor when he pulls the boys apart. George defines entitlement. From his childhood, he was well aware that as his family is the “First Family” of Midland, that everyone else was riffraff and should kowtow to him.

As a boy terrorized the town with his carelessness and the good citizens could do nothing but raise their fists in anger and shout that one day that so and so would get his comeuppance.

What made George such a public nuisance? His mother. Isabela Amberson Minafer doted on George as no woman ever doted on her child. This was her Achilles’ heel, which like in any Greek tragedy is guaranteed to lead to a character’s downfall. Isabela prized dignity. As a young woman, the most wealthy woman in town, she was humiliated when Eugene Morgan came to serenade her and since he’d been drinking fell flat on his face, a spectacle that Isabela assumed the whole world witnessed. That was enough for her to banish Eugene from her heart and to marry a safe, drab accountant, Wilbur Minafer. As the gossip in town predicted, Isabela would lavish her affection on her child, George as Wilbur wasn’t the sort of man to stir up much passion in a wife.

Throughout the story George represents the wealthy descendants who add nothing to their family wealth. George is proud of his plan to never work because that’s what riffraff do. He reminded me of many of Horatio Alger’s dandies who parade around town with their noses in the air looking down at the riffraff who practice law or do business.

At a party George is smitten by Lucy, a beautiful girl who seems to see how pompous and ignorant George is. From the start when he unwittingly calls Lucy’s father an odd duck – not once but twice – in her presence, Lucy can see what a fool George is. George has no filter and doesn’t see anything wrong in his snobbish remarks. Chalk that up to poor parenting. He does get frustrated by Lucy’s reactions which, like a mirror, show him who the Most Pompous One of All is. Yet his protecting her when a sleigh overturns, leads to him winning her heart, which I question how I bought that except to say people are perplexing.

Tarkington’s wry style made me thoroughly enjoy this brat who grows into a snob. At the end, as much as I wanted justice for George, it was sad to see his tragic fall, a fall that many first families must have felt as the world progressed and those who scoffed at the automobile, which they thought were silly “sewing machines” that no dignified person would want to crank to start and then crawl under to keep going.

Aunt Fanny, who lives with George and his family, says this about automobiles, which Eugene’s factory makes:

“Because I’ve begun to agree with George about their being more a fad than anything else, and I think it must be the height of the fad just now. You know how roller-skating came in—everybody in the world seemed to be crowding to the rinks—and now only a few children use rollers for getting to school. Besides, people won’t permit the automobiles to be used. Really, I think they’ll make laws against them. You see how they spoil the bicycling and the driving; people just seem to hate them! They’ll never stand it—never in the world! Of course I’d be sorry to see such a thing happen to Eugene, but I shouldn’t be really surprised to see a law passed forbidding the sale of automobiles, just the way there is with concealed weapons “

I loved Tarkington’s observations and characters and plan to read his The Gentleman from Indiana as soon as I can. (That’ll probably be after Christmas.)

Since this is my book club’s choice for November, I also checked out the audio book and the movie, which I’ll post on later. I’ll also share more thoughts on particular characters and a comparison of the book and film later. For now, I’ll say the audio book I got did a fine job of conveying Tarkington’s tone to the story. It’s great for listening to in the car.

Comments Off on The Magnificent Ambersons

← American Writers Museum
The Book of Will →