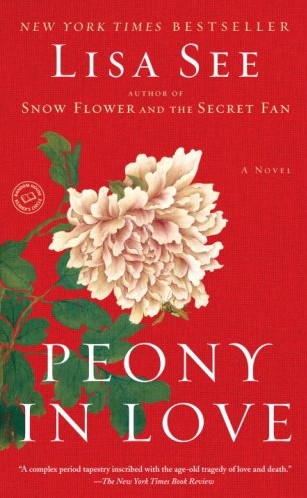 Lisa See’s novel Peony in Love is rather odd because about a quarter of the way into the story the protagonist dies. I wondered what was going on and how the story would continue and then I learned that most of the story is the story of a ghost, a hungry ghost.

Young Peony is the daughter of a well to do nobleman, who apparently loves his daughter and encourages her to become literate. Like all females, Peony’s forbidden to interact or even seen males outside her family. She’s eagerly preparing for her arranged marriage when her father hosts a multi-night performance of a Chinese Opera The Peony Pavilion. The women can watch from behind a screen separated from the men in the audience. The first night Peony slips out of the women’s area and encounters Ren, a dashing young man. They talk. They gaze lovingly into each others eyes. They pledge to see each other the next night.

Now Peony’s done for. She can only dream of Ren and after her second rendezvous becomes love sick. She won’t eat or sleep fearing that she’ll never be able to be with her true love. The doctor can do nothing and she wastes away, not knowing till after her family dresses her emaciated body in her wedding clothes and abandons her outside the family compound to waste a way and die outside, that her arranged husband was Ren. Custom demanded that the young girl die outside the family home to avoid bringing bad luck to the family. Sorrow and confusion result in Peony’s funeral tablet not getting properly dotted with ink so she’s left as a hungry ghost, doomed to wander the earth without peace.

Thus begins Peony’s haunting of Ren and his subsequent wives. Readers learn of the imaginative and rich beliefs the Chinese held about ghosts, how they must be fed and treated, how they can insinuate themselves into the lives of the living despite the clever crooked bridges that keep them out.

Readers also learn about the history of women writers during the thirty years when the Manchus defeated the Ming dynasty. It was a time of chaos and one good thing, perhaps the only one, was that during this upheaval men were so distracted by the political and social upheaval, women were allowed to venture outside, explore their surroundings, gather, discuss and write. Many women, whose ghosts Peony meets, were successful, published authors.

While there were times when I found it hard to care about the “life” of a ghost or what would happen to her ancestral tablet, I do applaud See’s creativity. I was able to keep reading, though I wasn’t as concerned with the ghost heroine as I had been with See’s flesh and blood ones. Still I recommend this novel, which makes the history of China come alive, to any lovers of the genre.

Comments Off on Peony in Love

Posted by smkelly8 on April 18, 2014 in historical fiction

← From The Writer’s Almanac
Reference Homework →