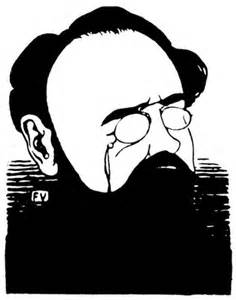 It’s the birthday of of writer Émile Zola (books by this author), born in Paris in 1840. His father was an Italian engineer, and he died when Émile was seven, leaving the family to get by on a small pension. Émile’s mother hoped he would become a lawyer, but he failed the qualifying examination, and so he took a series of clerical jobs. He also wrote literary and art reviews for newspapers.

In his early career, Zola generally followed the Romantic Movement in literature, but he later began a writing style he dubbed naturalism, for which he is best known. He defined naturalism as “nature seen through a temperament” and was inspired by Darwin’s On the Origin of Species (1839) to apply scientific principles of observation to the craft of fiction. Between 1871 and 1893, he wrote a 20-novel series called Les Rougon-Macquart about different members of the same fictional family during France’s Second Empire. He wrote of this project: “I want to portray, at the outset of a century of liberty and truth, a family that cannot restrain itself in its rush to possess all the good things that progress is making available and is derailed by its own momentum, the fatal convulsions that accompany the birth of a new world.” The most famous books from the cycle are The Drunkard (1877), Nana (1880), and Germinal (1885).

He was also involved in the famous Dreyfus affair, in which a Jewish army officer, Alfred Dreyfus, was wrongfully accused of passing military secrets to Germany and imprisoned on Devil’s Island. Evidence later came out that strongly implicated another man, but the evidence was suppressed to protect the original verdict. Zola published an open letter on January 13, 1898, entitled J’Accuse…!, on the front page of Paris daily L’Aurore. In it he accused the French army of obstruction of justice and anti-Semitism. He was convicted of criminal libel on February 7, but fled to England before he could be imprisoned, wearing only the clothes on his back. The following year, the government offered him a pardon, which he accepted, even though doing so implied that he was guilty. He was finally exonerated of all charges in 1906, four years after his accidental death of carbon monoxide poisoning from a stopped-up chimney.

I want to read Émile Zola’s A Lady’s Paradise.

Posted by smkelly8 on April 2, 2014 in writers, Writers' Almanac

← Homework: Geography
From The Writer’s Almanac →