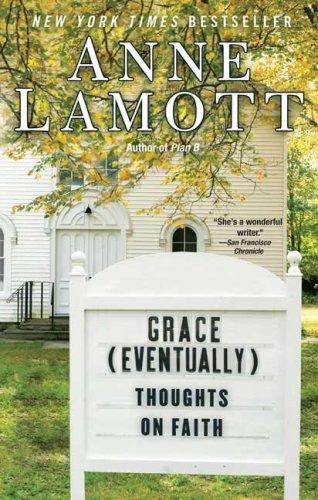 In Grace (Eventually) Anne Lamott shares her thoughts and experiences on faith, motherhood, politics, and activism. I felt I got another glimpse into her life in Northern California and I got to know more about her son Sam, her friends like Fr. Tom and Anne herself. It’s like sitting at a kitchen table listening to a witty friend, with whom I sometimes disagree, relate her ups and downs and review her hard times with bad boyfriends, drugs and alcohol that didn’t harden her. (An example of grace, huh?)
I love how honest and perceptive she is. She doesn’t buy the cheap generalities we can be spoonfed. For example, on parenthood she writes

Why did I, like many other single women, many gay men and women, many older women, and many other no-so-obvious parents, people who used to think they could never have kids, choose to do so?

Let me say that not one part of me thinks you need to have children to be complete, to know parts of yourself that cannot be know any other way. People with children like to think this, although if you are not a parent, they hide it–their belief that having a child legitimizes them somehow, validates their psychic parking tickets. they tell pregnant women and couples and one another that those who have chosen not to breed can never know what real love is, what selfishness really means. They like to say taht having a child taught them about authenticity.

This is total crock. Many of the most shut-down, narcissistic, selfish people on earth have children. Many of the most evolved–the richest in spirit, the most giving–choose not to. The exact same chances for awakening, for personal restoration and connection, exist for breeders and nonbreeders alike.

One essay that was especially interesting for me to read was about Anne speaking at a conference in Washington DC. I was at that conference and I was there during this scene. She describes a Q&A session with Richard Rohr, Jim Wallis and Anne. It was going along and then a man asked about Christian progressives and abortion, which he opposed. That was a dramatic moment. Quite tense in fact. Both Rohr and Wallis were fair. They acknowledged how contentious this issue was and that there were too many abortions. Neither stated an opinion on whether it should be legal or not. They were quite diplomatic.

Anne was to as she states and I recall. Then later after taking another question, she returned to the abortion issue and elaborated on how she had had abortions and how she felt they were necessary at this point of her life. It got real tense. She was clearly going out on a limb. She seemed surprised that progressive citizens might not share her beliefs on this. In this book she goes into detail about the experience and how she felt during and after. It is worth reading.

I do recommend Grace (Eventually) as a smart, humorous gift of Anne’s views on life and God. I don’t think one has to be a Northern Californian vegan who has smoked lots of dope to enjoy it. She’s a welcoming writer.

Comments Off on Grace (Eventually)